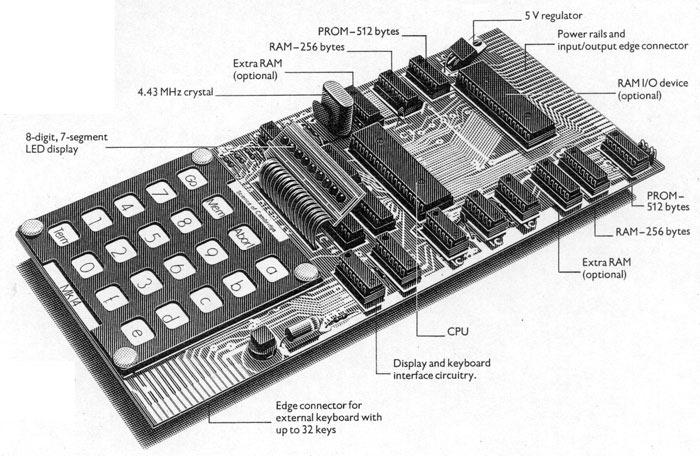 The Microcomputer Kit 14 (MK 14) was Sinclair's (at that time called "Science of Cambridge”) first computer. Based on the National Semiconductor SC/MP processor, the MK 14's capabilities were minimal by today's standards - modern digital watches are considerably more powerful!Despite the MK 14's severe limitations, it was one of the most important British computers ever produced. Its success in finding a previously untapped market was not lost on either Sinclair or his employees, notably Chris Curry, soon to break away and establish Acorn. Without the MK 14, there probably would never have been a ZX81, Spectrum, BBC Micro or Archimedes, and the British computer scene would have been very different.The MK 14 was a 31-piece computer kit sold by Science of Cambridge of the United Kingdom. It was first introduced in 1977 for UK£39.95 +VAT. The MK14 eventually sold over 50,000 units. It used a National Semiconductor SC/MP CPU (INS8060), 256 bytes of random access memory (RAM), which was directly expandable to 640 bytes on board and 2170 bytes total. It used an 8 or 9 red light-emitting diode (LED) seven segment display. There was also an optional VDU supporting 32×16 text or 64×64 graphics. Input and output was a 20-key keyboard and reset switch, with an optional 128 bytes of RAM and 16 I/O lines available by adding an INS8154N RAM/IO chip. Cassette-based and PROM storage were optional extras, a sound card was not included but a design for one was provided.